Danny Fresh sure picked the right stage name. He’s fresh, but in a good way, and friendly. The man with the velvety voice has been gracing German stages for 20 years now. Initially an MC, he went to become a presenter at trade fairs and symposia, a newscaster who rapped about current events on bigFM Newsrap, a teambuilding coach for customers that come to his company, Raise Your Voice Production, an “education artist,” a guest instructor at the Pop Academy Mannheim, and much more. This is clearly a man who has something to say. And he did plenty of that in this interview we conducted to welcome our new HK Audio endorser to the fold. Read and watch our Soundmakers blog to find out in words and moving pictures what he and his LUCAS NANO are all about.

Danny: My roots are in rap and that opened some doors for me. The presentation thing came along, and then the teaching. All of it is connected to the rap culture of relating your experiences. The next step was the Pop Academy, where I was invited to be a guest instructor. The most recent thing to come my way was the business coaching gig, but let’s not forget bigFM, where I rap the news once a week.

Markus: You’re also an entrepreneur now that set you’ve set up an agency for creative communication. Is that a sign of our times, where the information overload prevents you from getting a message across to the audience unless you deliver it with creative trimmings?

In workshops, Danny Fresh is not only stressing the importance of the word flow, but also the meaning of (stereo) effects. Credit: Klangstiftung

Danny: A little bit, yeah. I had to think a little outside the box here, as I was already interested in politics as a 16-year-old. That’s not the case with your average teen. What I always want do is something along the lines of what I’m doing with the bigFM Newsrap – that is, to get the keywords across in a rap so you can plug them into a search engine to get more background information. I see this as a special treat, and not the main course. I don’t think you can always connect with teenagers that way, but it makes a change from the hourly news. Rap has always been political to me, so I don’t need a bridge to crossover to the news. 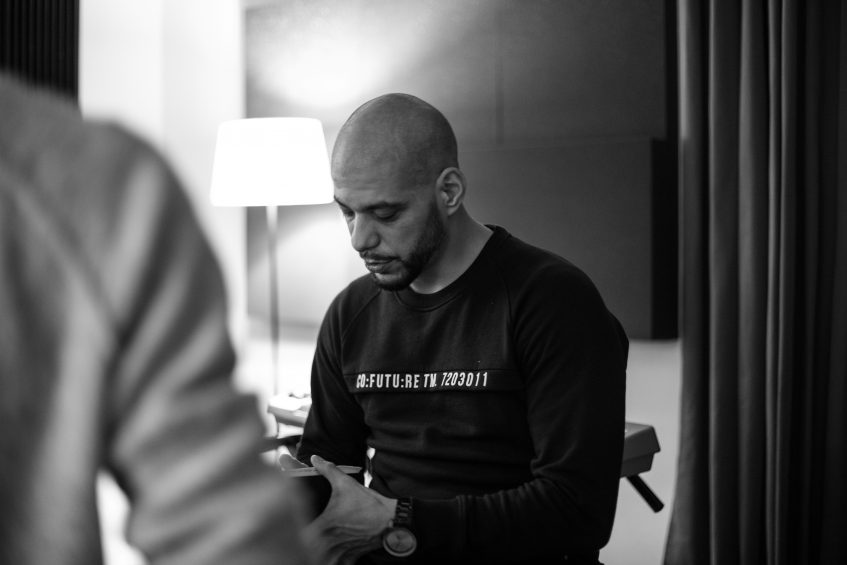 Markus: The bridge for us was the #lifeisstereo campaign in the first half of 2018, where I was told you engage in a lot of social projects. You go to schools and juvenile detention centers. What kind of workshops do you do there?

Danny: Rap and songwriting workshops. It’s about teaching the basics. The fact is that today’s music classes are no longer designed to allow kids to make music. It’s all about listening now, even though it’s become so much easier to get creative and compose very quickly with the tech that’s out there. I also close the gap that German lessons leave. Despite my talent for languages, I was poor at this subject because I wasn’t interested in studying Goethe, Schiller and the like. There’s nothing German teachers want more than students who write creatively. They just don’t get kids to that point. I’m (booked) in prison a lot these days, and the LUCAS NANO 608i is a constant companion for me. The same thing goes here – it’s about getting creative. Everyone has a life story to tell. It’s not like rap and proper grammar are married to each other. At gigs like this, it’s certainly not all about hyper-correct German. 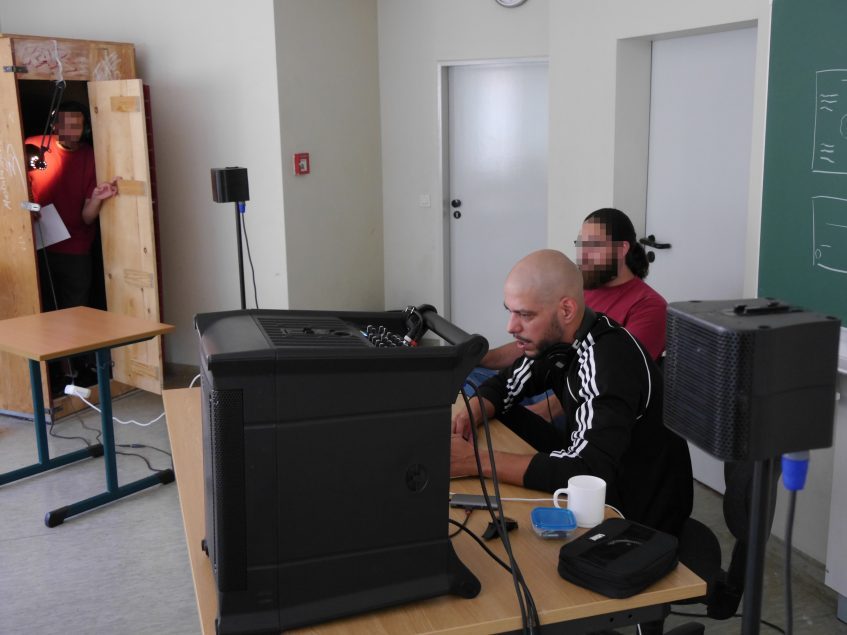 In youth prisons, Danny Fresh is teaching the young offenders how to use their creativity for telling the stories of their lives. With him, his new found company, the LUCAS NANO608i. Credit: Danny Fresh

Markus: I vividly recall the physical education classes when the teacher showed up at the gym with a device that was also portable and played a cassette. The sound didn’t matter because the choice of music was the hot topic in class. It was a mono player, but you set up the LUCAS NANO 608i as a stereo system. Is that just for your satisfaction or do you mention why stereo makes for a better listening experience in your talks? Are the kids interested in why stereo sound makes a difference?

Danny: In the early days, I was fixated on language. And I was happy just have any kind of player at all on site. There’s a lot of back and forth over the phone with many of these schools. You want to make sure that the equipment is on site, but then you get there and the right gear doesn’t. That’s why I ended up buying a mono player. When I started talking more about the music production side of it in my presentations, the potential of that device was soon tapped out. Kids listen to a lot of music over cell phones, headphones or sound systems, so their ears are trained. They just don’t have the vocabulary of a music maker. They don’t say “put some EQ on it,” “give me a stereo delay” or something along those lines. But they can describe what they want by giving you the names of songs. Something as simple as panning the drums makes a huge difference. Effects like delay and echo, which are part of the modern rap vocabulary, only work well in stereo. Kids are not used to hearing stereo over their cell phones, but they can hear the difference. And I take them up on that by getting them to move to the middle of a room and listen carefully to what happens. It’s like a light bulb going on. That’s why it’s great to have an easily portable system like LUCAS NANO608i with you, so you can demonstrate this stuff without a lot of fuss. 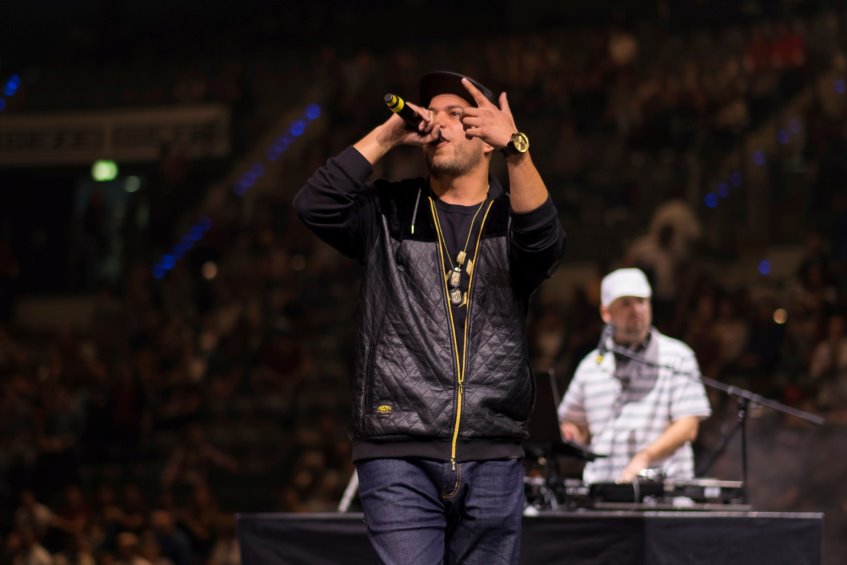 Word up: Danny Fresh is reaching out to bigger crowds, either as MC or show host. Credit: Danny Fresh

Markus: We know what panning means – spreading instruments from left to right across a panorama to mimic a stage setup – but how do you teach it to kids?

Danny: I take a visual approach, telling them to picture a stage. I ask questions: “Where do you see the horns, the vocalist and so on?” Then we turn knobs to put them there. Effects are for the kids to play with; everyone can go wild experimenting with them.

Markus: Do you use the effects that can be controlled via the NANO REMOTE APP?

Danny: Not in the workshops. That would be total technical overload because as soon as kiddies see an iPad, they can’t get excited about anything else. I do use the mixing console to connect four microphones, which I sometimes control from spots in front of the stage. And of course it’s nice that I don’t have to run to the front every time I have to adjust this or audition that.  The system simply has everything I need for my job. Physical connectivity, Bluetooth – you get it all in one package. Musician, presenter or teacher – everyone wins with LUCAS 608i.

Page load link
Cookies werden zur Benutzerführung und Webanalyse verwendet und helfen dabei, diese Webseite zu verbessern. Durch die weitere Nutzung dieser Webseite erklären Sie sich mit unserer Cookie-Police einverstanden. / We use cookies on our website to give you the most relevant experience by remembering your preferences and repeat visits. By clicking “Accept All”, you consent to the use of ALL the cookies. However, you may visit "Cookie Settings" to provide a controlled consent.
Einstellungen / SettingsAkzeptieren / Accept All
Manage consent
Diese Website verwendet Cookies, um Ihre Erfahrung zu verbessern, während Sie durch die Website navigieren. Von diesen werden die Cookies, die nach Bedarf kategorisiert werden, in Ihrem Browser gespeichert, da sie für das Funktionieren der grundlegenden Funktionen der Website wesentlich sind. Wir verwenden auch Cookies von Drittanbietern, mit denen wir analysieren und verstehen können, wie Sie diese Website nutzen. Diese Cookies werden nur mit Ihrer Zustimmung in Ihrem Browser gespeichert. Sie haben auch die Möglichkeit, diese Cookies zu deaktivieren. Das Deaktivieren einiger dieser Cookies kann sich jedoch auf Ihre Browser-Erfahrung auswirken.
This website uses cookies to improve your experience while you navigate through the website. Out of these, the cookies that are categorized as necessary are stored on your browser as they are essential for the working of basic functionalities of the website. We also use third-party cookies that help us analyze and understand how you use this website. These cookies will be stored in your browser only with your consent. You also have the option to opt-out of these cookies. But opting out of some of these cookies may affect your browsing experience.
SAVE & ACCEPT
Go to Top