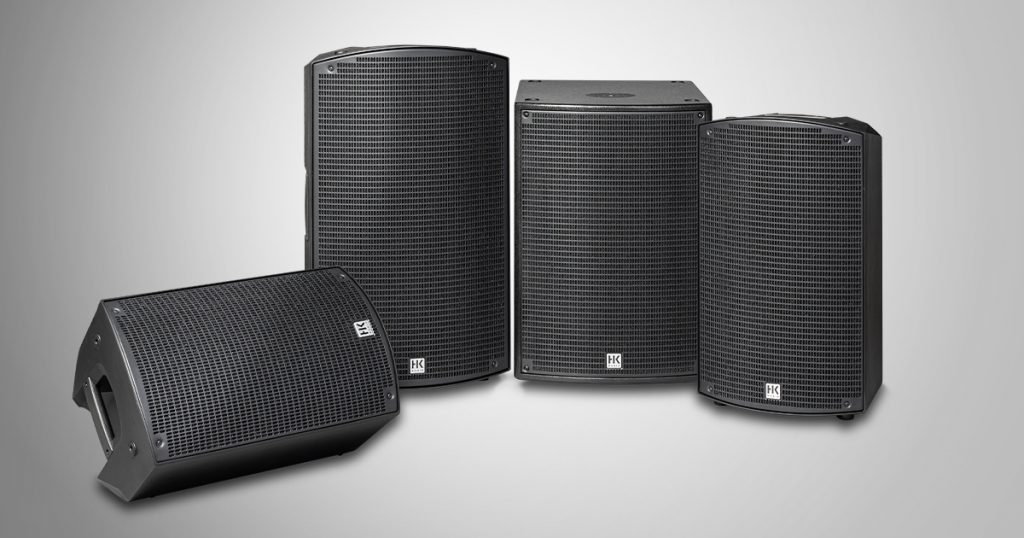 For 40 years, St. Wendel has been home to the production of speaker systems that are constantly setting new industry benchmarks in terms of acoustics, technology and economy. For the first time, HK Audio is now broadening this expertise to the popular category of   powered PA speakers with moulded plastic enclosures. The new SONAR series combines HK Audio’s sound quality with state-of-the-art features in a particularly popular price segment.

The SONAR full-range models feature a 24-bit DSP controller with colour display, which can be used to conveniently operate the comprehensive connection and setting options. These include two channels for microphone or line signals and an AUX channel for music signals. Not only does the luxury 3-band EQ in each channel exceed the usual standards in this product class – all settings for the SONAR Xi models can even be conveniently remote controlled with the free SONAR REMOTE app (for iOS and Android). Via the AUX channel, signals can also be streamed wirelessly via Bluetooth 5.0. Bluetooth TWS (True Wireless Stereo) is also possible when using two SONAR speakers.

The SONAR 115 Sub D subwoofer also features a 24-bit DSP controller, with a display that allows you to set parameters such as the crossover frequency, polarity and a delay. A unique feature in this price class are the two presets for Cardioid operation when using two subwoofers. This means when the bass is directed towards the audience, the unwanted emission of low frequencies to the rear is noticeably reduced.

“With SONAR, our goal was to develop the best equipped, best sounding and easiest to configure speaker family in this price segment”, says HK Audio Senior Product Manager Rüdiger Forse. “My favourite features of the SONAR Xi models are music streaming and remote control via Bluetooth 5.0. This new standard ensures higher ranges and significantly more stable connections. And the app not only allows to adjust the volume of the channels, I can also control the channel EQs from the audience, for example. In this way, every microphone signal is elegantly under control.  The SONAR subwoofer stands out thanks to its impressive bass response and effective Cardioid options. Even non-professionals can now create perfectly working Cardioid setups with over 30 dB reduction of low frequencies to the rear at the touch of a button without any previous knowledge. Bands or DJs, who often have to perform for hours directly behind the PA, will really appreciate this feature”.

The SONAR series speakers will be available in stores in November.

10 years ago, HK Audio set the standard in scalable line systems for live applications with the ELEMENTS series. Since then, the ELEMENTS family has…

HK Audio is now distributed in Poland by Lauda Audio

We are delighted to announce that we have signed an exclusive contract with Polish firm Lauda Audio Adamowicz sp.j. to distribute HK Audio in Poland from October 2020. ​ Lauda Audio will take…

HK AUDIO is expanding the PREMIUM PR:O series with the addition of the new MOVE 8, a high-performance, battery-powered loudspeaker. “The new Move 8 combines…

HK Audio is delighted to unveil PREMIUM PR:O D2, the next step in the evolution of the class-leading, made-in-Germany PREMIUM PR:O family of loudspeakers. The…

Here at HK Audio, we develop professional and innovative products for Soundmakers: products that give them the easiest way to the best sound. But it’s way more than that. We give them a stage, and a home.

Use this form to find things you need on this site

Wir verwenden Cookies, um Ihnen das beste Nutzererlebnis bieten zu können. Wenn Sie fortfahren, diese Seite zu verwenden, nehmen wir an, dass Sie damit einverstanden sind.
We use cookies to give you the best user experience. If you continue to use this site, we assume that you agree. OK