A success story in 2.1 stereo

LUCAS has been the go-to gigging buddy for more than 20 years now. Made in Germany, these top-drawer powered 2.1 stereo systems have stood the test of time. The product line’s longevity isn’t just down to its great genes. Its makers have been putting in the time and thought needed to evolve and adapt the Light Ultraweight Compact Amplification System to customer requirements and changing target audiences.

The first LUCAS made a huge splash when it dropped in late fall of 1998, and its successors have continued making waves over two decades. Each of the 19 versions found its fan base, as the countless comments posted on HK Audio’s social media channels would attest. Practically every day, someone somewhere has something good to say.

Let’s pay tribute to the line’s longevity with a trip down memory lane to revisit all those great offshoots of the LUCAS family tree. Perhaps our recap will shed some light on why thousands of entertainers and mobile DJs chose to take the easiest way to the best sound over all the years.

The inceptive LUCAS was released in late autumn 1998 and presented to the public eye at the Musikmesse in Frankfurt a.M., 1999. for the first time. 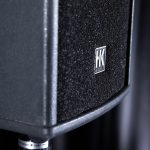 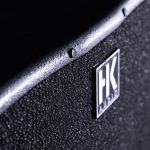 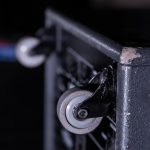 Equipped with reels, the LUCAS was easy to transport.

Stefan Fischer, Strategic Product and Portfolio Manager, was there when LUCAS was born: “We had already pioneered 2.1 systems with our satellite/subwoofer systems a few years before the first LUCAS was released, so we fired up the development engine to become the market leader in Germany.”

“The LUCAS-style system – that is, an active turnkey satellite/subwoofer system with a powerful bass – was the outcome of this development effort. It was also our response to growing demand from entertainers who regularly appeared at family get-togethers, weddings and other events. Weighing in at 52 kg, the original LUCAS was actually the lightest version in this performance class.

“The name is an acronym made up of the first letters of the benefits that set this system apart – Light Ultraweight Compact Amplification Systems. Equipped with wheels, this new PA could be transported in a passenger car without a lot of effort. That was a first.” 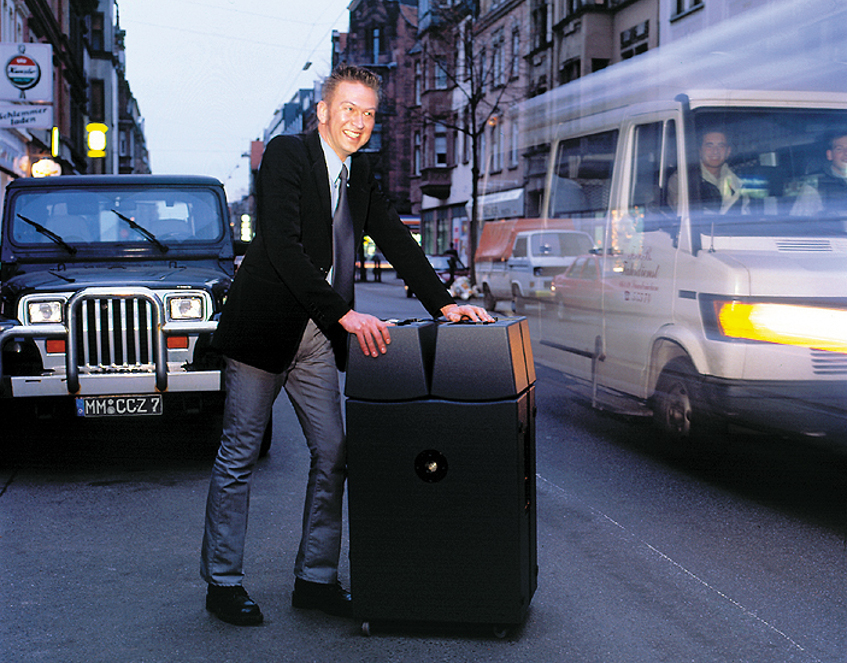 Stability, bang-for-buck, power, quality audio, groundbreaking plug-and-play features – all that added up to make the LUCAS a shooting star. Even before it was presented at the 1999 Musikmesse, demand had been so high since its launch in late fall the previous year that the company’s St. Wendel factory could hardly keep pace. Imitations hit the market a year or two later, but by the time other vendors released systems similarly labeled with first names, the original had already taken the next rung up the evolutionary ladder. 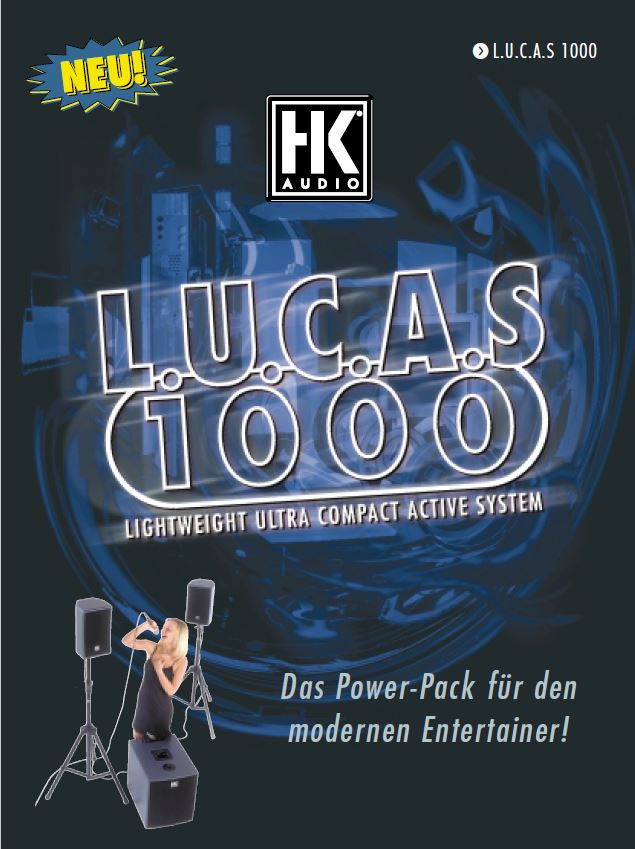 LUCAS 1000 was a slightly more compact version with even more powerful components and crisper sound. Released in 2001, it is still considered by some fans to be the best LUCAS ever.

Just a year later, the LUCAS XT impressed the professional world with its sensational bass response – nothing like it had ever been heard from a system of this size before. 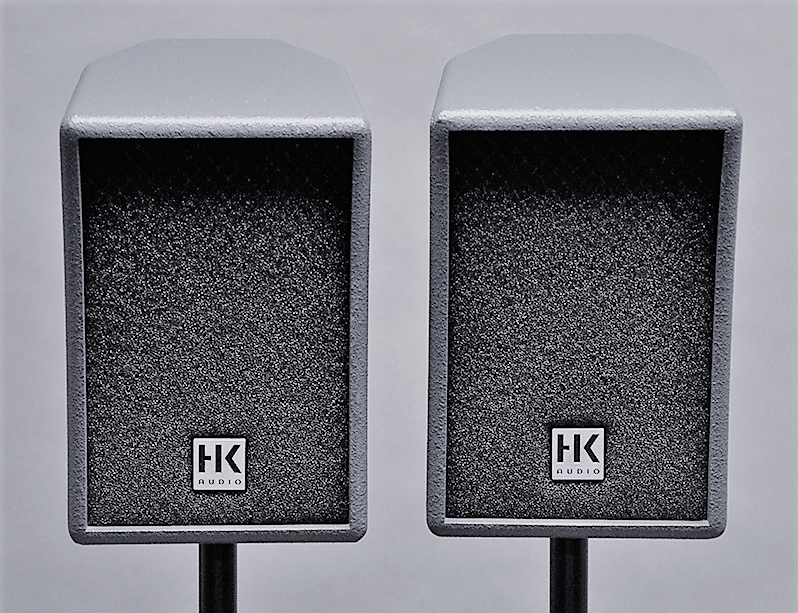 Visitors at its public debut were amazed to see the ACTOR speakers being carried out of the room, leaving just the small 6″ satellites in place to pump out the sound. The audience was convinced that that kind of performance had to have come from larger system.

Four years later, the LUCAS XT got a cosmetic makeover with the SMART version. 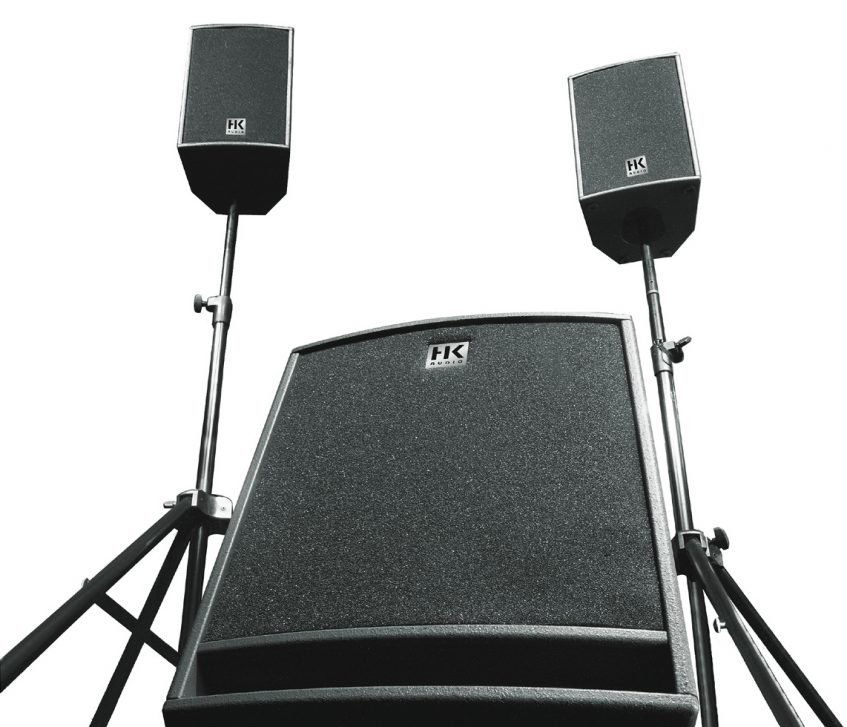 LUCAS 2000 (2003) was the first LUCAS system with a digital power amp. It foreshadowed the shape of things to come with the DSP-controlled generation. 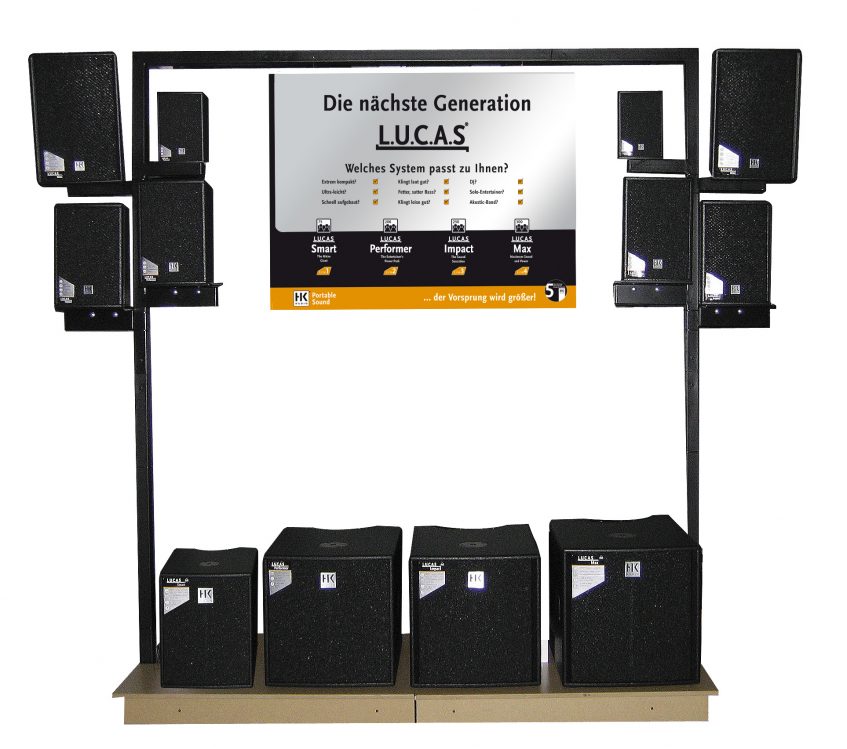 A digital generation of LUCAS systems arrived in 2006 and 2007 with SMART, PERFORMER, IMPACT, MAX and ALPHA. Each model was built to meet different requirements.

When you come up with a brand name that becomes synonymous with a product category – like that tissue paper that became the generic name for all disposal handkerchiefs or a certain cola that did the same for soft drinks – you want to stay ahead of the crowd. (Strategic Product and Portfoliomanager Stefan Fischer)

Built for purists, PERFORMER was a LUCAS 1000 successor with a fresh design twist. IMPACT had much the same power amp as PERFORMER, but it came with an added digital component, a multiband limiter/compressor that lets you shape the sonic image more invasively. MAX shared the same DNA, but packed a more powerful punch. “The final incarnation, ALPHA, came very close to matching the performance of a classic PA with 1000 watts RMS for the 18″ subwoofer, and 2 x 600 watts RMS for the satellites. It was a huge market success. Even bands that played a heavier style of music were frequently seen with an added subwoofer to configure left / right stage setups,” says Stefan Fischer, commenting on the great 2006-7 flood of models. 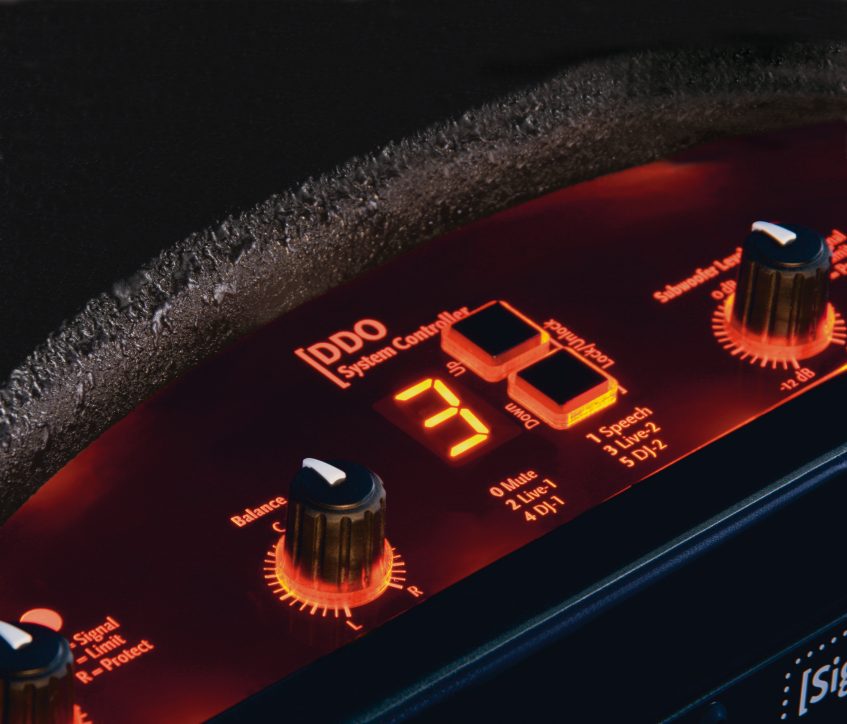 MAX and ALPHA offered presets by which you could manage a greater sound manipulation. 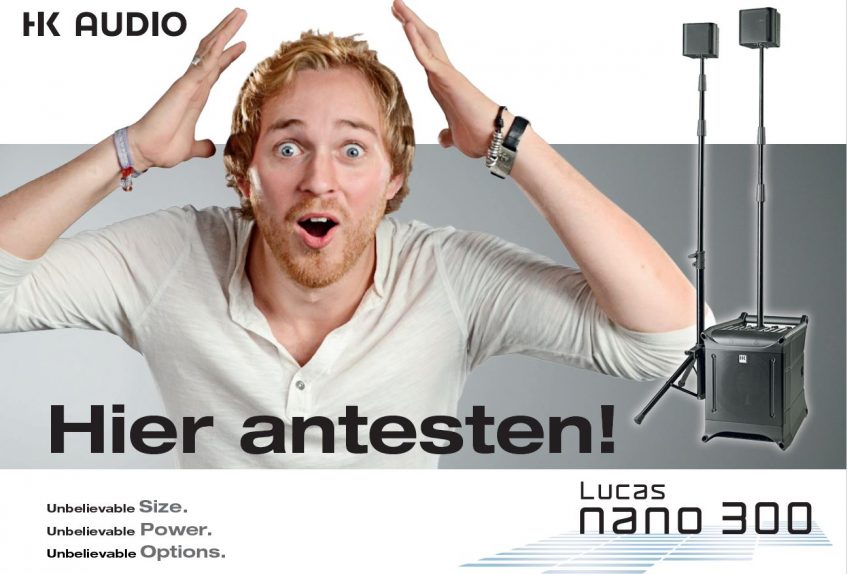 The next stage of development culminated in the LUCAS NANO series in 2012. LUCAS NANO 300 targeted a completely different group of users.

“We created a product at the crossroads of professional and consumer audio; this was personal audio that you can carry to a gig in one hand. It was foreshadowed by the interim LUCAS 600 with a 12″ subwoofer, which was both a NANO predecessor and a smaller LUCAS 1000. It took a while until we came up with a LUCAS NANO 600-like 10″ subwoofer that actually pumped out the kind of pressure a bass should have.” 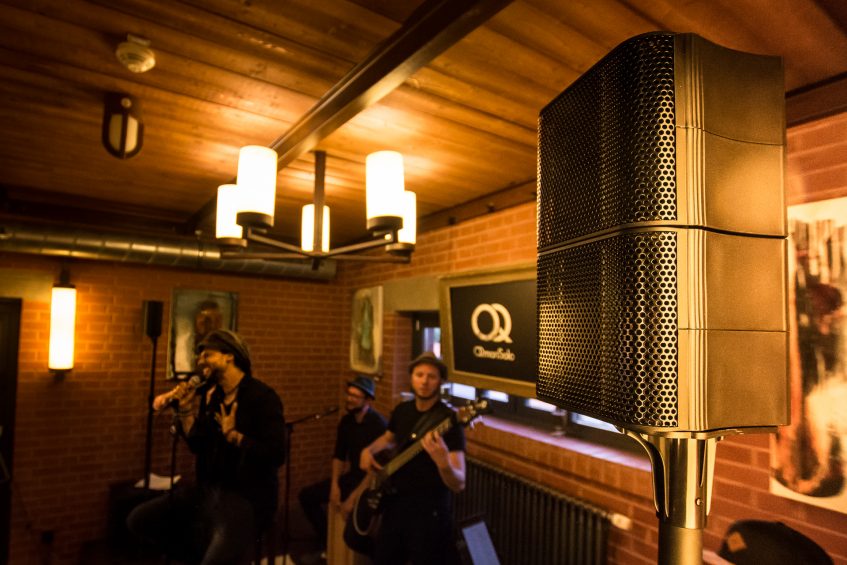 LUCAS NANO soon became a steady company of small line-ups, who want to leave a big impression with their audiences.

Many versions of the NANO series were developed between 2012 and 2017 as all-in-one solutions to meet diverse needs. They came in different guises with and without FX, in stereo only, or with five channels.

The latest 608i is remotely controllable via app. This line of products offers plenty of nifty options for teachers and speakers who are happy to work with just two channels, and for musicians who need small monitoring system of their own on stage.

With the ranks of professional mobile DJs who regularly play events such as weddings, company events and parties swelling, HK Audio identified a target group that

LUCAS 2k 15 and 18 check all those boxes. The marketing tagline “The Heartbeat of a Mobile DJ” sums up all that is near and dear to potential users. The latest LUCAS system has attracted quite the following since its 2018 launch. 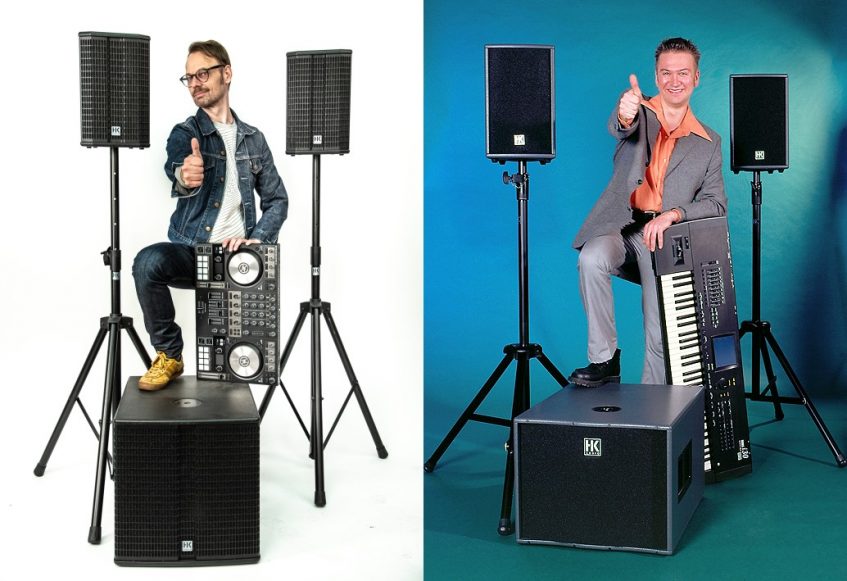 With the change of the times,LUCAS has managed to amaze musicians and DJs alike (Advertisement on the right is from 1999, the re-hash from 2019 with thte LUCAS 2K).

Native Instruments, the leading manufacturer of production software and hardware, took it on tour to showcase its new products. That’s the ultimate stamp of approval, confirming how well LUCAS has made the transition from a solo entertainer’s backline to a mobile DJ’s rig. All LUCAS models lived up to claim that they provide the easiest way to the best sound in their day, and the current LUCAS series is another keeper of the flame. If it turns that LUCAS has another 20 years to go in service of great sound, rest assured that future generations will also deliver on that performance promise.

Page load link
Cookies werden zur Benutzerführung und Webanalyse verwendet und helfen dabei, diese Webseite zu verbessern. Durch die weitere Nutzung dieser Webseite erklären Sie sich mit unserer Cookie-Police einverstanden. / We use cookies on our website to give you the most relevant experience by remembering your preferences and repeat visits. By clicking “Accept All”, you consent to the use of ALL the cookies. However, you may visit "Cookie Settings" to provide a controlled consent.
Einstellungen / SettingsAkzeptieren / Accept All
Manage consent
Diese Website verwendet Cookies, um Ihre Erfahrung zu verbessern, während Sie durch die Website navigieren. Von diesen werden die Cookies, die nach Bedarf kategorisiert werden, in Ihrem Browser gespeichert, da sie für das Funktionieren der grundlegenden Funktionen der Website wesentlich sind. Wir verwenden auch Cookies von Drittanbietern, mit denen wir analysieren und verstehen können, wie Sie diese Website nutzen. Diese Cookies werden nur mit Ihrer Zustimmung in Ihrem Browser gespeichert. Sie haben auch die Möglichkeit, diese Cookies zu deaktivieren. Das Deaktivieren einiger dieser Cookies kann sich jedoch auf Ihre Browser-Erfahrung auswirken.
This website uses cookies to improve your experience while you navigate through the website. Out of these, the cookies that are categorized as necessary are stored on your browser as they are essential for the working of basic functionalities of the website. We also use third-party cookies that help us analyze and understand how you use this website. These cookies will be stored in your browser only with your consent. You also have the option to opt-out of these cookies. But opting out of some of these cookies may affect your browsing experience.
SAVE & ACCEPT
Go to Top